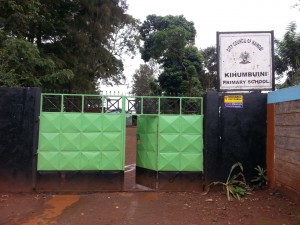 Mr. James Kihara, Deputy head of the Kihumbuini primary school has been a teacher at the school for 14 years. It’s a school with 1,200 pupils and an average class size of 75.

Mr Kihara told us the biggest challenges facing his school related to the number of children, the space they had and the lack of teachers.  He also identified poverty as a major issue.

Since his school joined the EACDT programme, he and his colleagues have noticed the kids have a better and more positive outlook to life and now have some hope for tomorrow. Plus the kids have now learned a new game which they have really come to love!

There is one boy in particular, Caleb Obwage, who has been in the programme for two years and is now in class 8 (last year of primary school). His behaviour and character have improved so much since getting involved in the programme; so much so that he is now the head boy of the school and is a great role model for the younger kids.