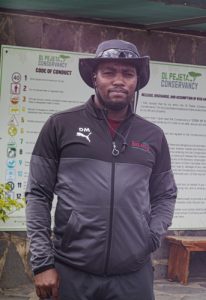 Dolla Abala:         Even before EACDT was formed, I realized I had been blessed with a talent for playing cricket.  What was unknown to me at that stage was that I also had ability as a coach.

I grew up in a place called Ngara Railways and the only sport known to me and to my friends was football.  So, as children not having been exposed to any other sport, we just played football from morning ‘til evening, come rain or come shine.   However, this changed one day when two visitors came to our school.  One was white, the other black and they had a TV and a DVD player with them.  I must confess that I didn’t hear much of what our teacher said in his introduction because all my attention was focused on the TV and DVD player. The white man turned out to be Paul Phillips and his colleague was Donald Oyieko and their reason for being there was to introduce cricket to our school.  Until then, most of us knew that a cricket was an insect, but I don’t think any of us knew it was also the name of a sport! Then I watched their video and was captivated by what I saw.

EACDT has come a long way since its founder and original benefactor, Derek Breed, had the original idea that essential character traits could be taught through the medium of sport in general, and cricket in particular. I have been fortunate to have been a part of it since its commencement, and to have helped it grow from having one hub to six.  Somewhere along the way, I discovered my gift as a coach.  I can remember our first character/cricket session at Kawangware Primary School as if it was yesterday. Our Programme Director (and boss) David Waters likes to tell this story: I was one of three coaches present and was tasked with introducing cricket to the students.  I asked how many of the students knew what cricket was.  No answer came for a few moments and then Naomi said confidently that cricket is an insect.  I congratulated Naomi for her correct answer and then astonished the whole group by saying it was also the name of a sport.  Just like me, the children took to it as soon as it was introduced and, as a direct result of our programme, Naomi has gone on to represent Kenya as a member of our national women’s team, travelling from a slum in Nairobi to many countries.  Naomi’s is but one of many success stories that have come through our character cricket programme and our coaches are so proud of these achievements.  Examples like that give me cause to believe my abilities as a character and cricket coach have grown through the years and it’s all thanks to the opportunities EACDT has given us coaches to practise our craft.