14-year-old Alice Muoki was a surprise inclusion in the national women’s team to the Kwibuka Cricket For Peace tournament fromJune 8-11 at the Kicukiro Cricket grounds in Kigali Rwanda.
Muoki, commonly known as Naomi, a class eight at Kawangware Primary, was named in the 14-strong squad that sought to reclaim the title they won in 2015. 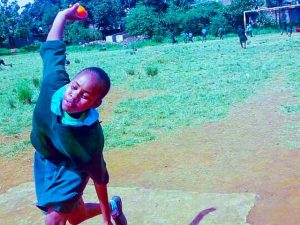 The 14 year old who only knew ‘cricket’ as an insect before the East Africa Cricket Foundation (EACDT) rolled out cricket coaching programs in various schools in Nairobi won the selectors confidence after emerging the highest wicket taker in the just concluded Nairobi Ladies league.
“Naomi is one you need to look out for, she’s a massive talent,” said coach Lameck Onyango.
The news of her selection was received with jubilation in her school with his coach saying that her selection will impact positively in the growth of the sport in the slums of Nairobi.
“It’s a delight to have her selected to represent the country. As EACDT we are all delighted with her selection and we are confident that she will learn good lessons that will add value to our program,” said her coach Andrew Mboya.
Once again Kenya opted with a strong team for the event that is usually used as a development event for the teams in the region.
Margaret Banja, Sarah Bhakita, Ruth Mwihaki three of the most capped ladies cricketers in Kenya were named in the squad that has two new faces.
Banja and Bhakita were part of the national women team that won the International Women’s T20 Cup in Sharjah, in December while Mwihaki made a return to the team.